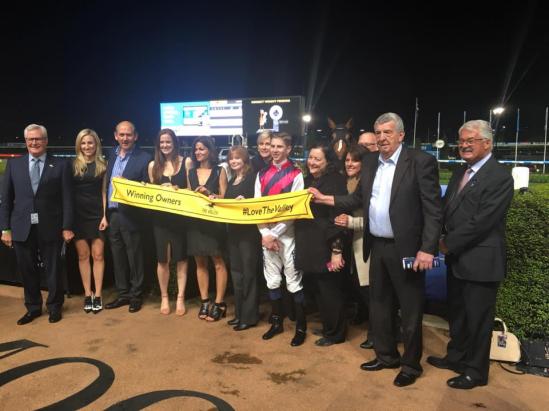 How wonderful it was to see our lovely filly Selenia outshine a quality field in last Friday night's Group Three Champagne (Scarborough) Stakes at Moonee Valley.

Having her third run back from a spell, the daughter of Not A Single Doubt travelled beautifully on pace for Jye McNeil and looked to have the $150,000 feature won a fair way from home.

It was the second win - and second black type success - for Selenia whose seven starts have yielded just short of $190,000 in stakes - an outstanding result for a $30,000 yearling!

"She has always been a strong filly," Don Healy said, noting that her lead up work had been good with the main concern being her "awkward barrier."

"We will be able to pay for the new stables now," Healy joked, adding that there are similar races around for Selenia over the course of the spring carnival.

One very happy owner on course was Cheryl McCarthy whose horses have been enjoying a great run of late - Classic Diva saluting a few days previously.

"It has been a very good week!" she enthused.

A nice night also for the Holland family who are also lucky part owners of the Golden Slipper winner Capitalist.

Purchased by Robbie with Peter Ford at the 2015 Inglis Easter Yearling Sale, Selenia is out of the Hussonet mare Lunar Lady, daughter of the dual Listed winning Flying Spur mare Lunaspur - dam of the Group Two winners Moonovermanhattan and Colorado Claire.

Bred by Jacob Park Thoroughbreds, Selenia is a descendant of the famed matriarch Gondolette whose family has enjoyed great influence in this part of the world via the deeds of champion stallion Sir Tristram.

And this is a family that loves Moonee Valley - W.S Cox Plate winners Fields Of Omagh and Might And Power also descendants of Gondolette!