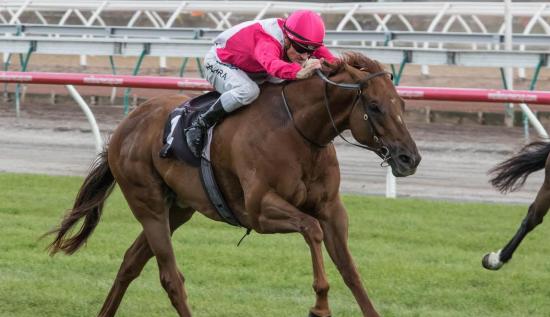 It was stakes win number four for our outstanding sprinter The Quarterback at Flemington on Sunday, the Newmarket Handicap winner kicking off his spring campaign in spectacular fashion.

Beautifully ridden by Max Allen on a day where strong wind was effecting the chances of runners, The Quarterback stayed smothered away until the 300m - creeping up on the inside of the field before racing clear.

Taking out the Gr.2 Gilgai Stakes by a very soft 3/4 length, The Quarterback increased his prize money tally to an impressive $1.45 million and Robbie Griffiths is confident that the best is still to come.

"Everything he has been doing at home suggests that he has come up better than ever," he enthused.

"I didn't want to get too carried away though as he was kicking off over 1200m instead of the 1000m we usually have him at - but I thought with a small field they might not go too hard which would suit him."

Robbie had been delighted with The Quarterback's efforts in trials leading up to his first up assault.

"He has never been a fantastic track worker but he was brilliant over 800m and even better over 990m. But I was going to be happy with a top three finish... so this is a very nice way to kick off his preparation!"

Allen reported that he was confident a long way from home... "when I got to the 400m I thought no way are they going to beat him today."

"When I asked him to go he just exploded, I reckon he is in for a massive preparation."

The Manikato Stakes and the Darley Classic are next in line for The Quarterback's three race spring campaign - one which shapes to be a very exciting one for his owners who are looking forward to having a leading contender on two of Melbourne's biggest days; W.S Cox Plate Day and VRC Derby Day.

It was an apt that The Quarterback win the Gilgai, a race that since 1999 has been sponsored by Gilgai Farm - breeders of the high class chestnut.

The Quarterback's dam Soorena is still a member of the Gilgai broodmare band, served last spring by I Am Invincible having produced a colt by that same stallion last September.

A son of Darley's dual Group One winning Street Cry stallion Street Boss, The Quarterback is a half-brother to the dual Gr.2 winner Philippi and his dam by Encosta de Lago is a half-sister to the Listed winner Spinning Jenny.