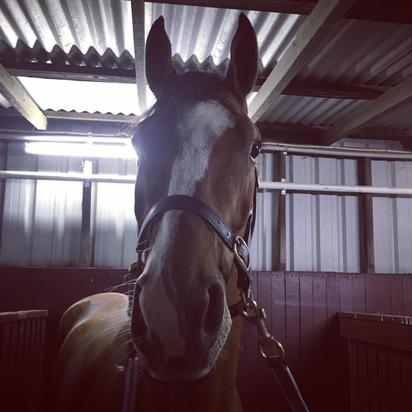 It's always good to get a winner in the royal blue, white and green colours of prolific owner Gerry Ryan who has been such a great supporter of the stable - and we were delighted to cheer on Song One at Cranbourne on Friday evening.

A horse who has always shown good talent, the son of Not A Single Doubt was having his first run since mid-March and a patient ride by Ryan Maloney saw him get the cash.

Travelling nicely midfield from an inside gate, Song One looked to need luck coming to the turn with horses all around and in front of him. But when a gap game he was quick to take it, putting on display a good will to win as he burst to the front.

It was win number two from just seven starts for Song One who looks ready to progress through the grades.

"He is a nice horse who really wanted to win tonight," a delighted Jade Matthews said, adding that the bay has come up well this preparation

A home-bred for Ryan's Limerick Thoroughbreds, Song One having not always enjoying the best of luck in his previous campaign.

Song One is one of three winners (from as many to race) for the New Zealand bred mare Numero Douze. Also dam of the stable's city winner It's One and the Singapore winner What's Dat, she is a daughter of Montjeu and the stakes winning Sir Tristram mare Tristachine.