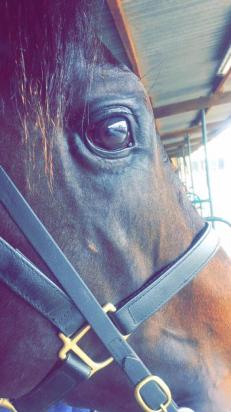 It was a Sale double for the stable and for stallion Henrythenavigator on Friday, Time To Sail breaking her maiden in strong fashion whilst not long after it was the turn for Celtic Trail to record her first victory.

And what great style she did it in, settling nicely in third position for Ryan Maloney and cruising up to them at the turn before giving a good kick and having two lengths on her rivals at the line.

It was the addition of blinkers that did the trick according to Maloney... "she would've won her previous start if she'd been wearing them but she just wanted to float. With them on she was a lot more switched on and sharp throughout the race."

"She found a nice spot and got into a good rhythm and once she kicked she was never in any doubt."

Reid Balfour was also impressed - "she was terrific today," he said. "She travelled up beautifully and was focused right to the line."

A home-bred for Limerick Lane Thoroughbreds, Celtic Trail is one of five winners for the city winning King Of Kings mare Kusha - half-sister to the Hobart Cup winner Offenbach from the family of outstanding European gallopers Rock Of Gibraltar and Riverman.