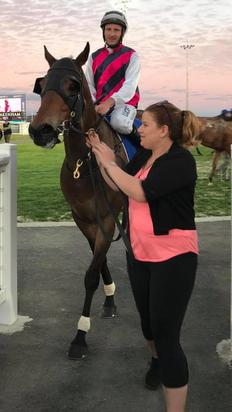 One of our most genuine gallopers, Roman Fizz was a well deserved winner at Pakenham on Thursday evening - the tough five-year-old putting his nose out on the line to take out the BM70 sprint.

Only just beaten when resuming at the same track late last month, Roman Fizz had derived great benefit from that run and was always travelling well midfield for his regular rider Max Allen.

Hooking out into the straight, Roman Fizz was one of several stretched across the track in an exciting finish and over the final stages he really charged - recording the third success of his 20 start career.

Welcomed back to scale by a large and enthusiastic group of owners, Roman Fizz brought smiles to many a face - including that of the stable's Beth Schoen.

"He only just missed first up so we are so happy that he got there tonight. He is a consistent horse and you go to the races with him knowing that he is always going to give his all."

Allen agreed, noting that he had been "pretty confident" leading up to the race.

"He put the writing on the wall last time and probably should've won that race, he just wanted to shy at the winning post."

"He had to dig deep late tonight - and he did."

A bargain purchase at the 2013 Inglis Melbourne Premier Yearling Sale, Roman Fizz is a son of one of our favourite stallions Magnus and the Noalcoholic mare Lemon Soda.

Bred by Widford Park, he is a half-brother to four winners including the stakes winner Testamarriage from the family of Oakleigh Plate winner Reactive.