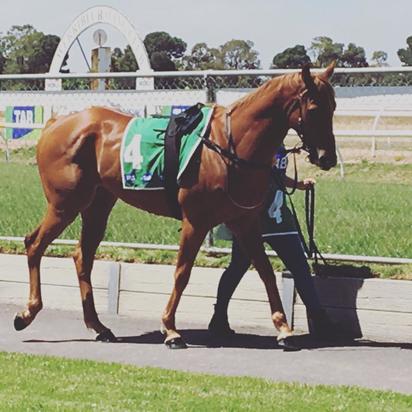 Still a bit green for Jye McNeil who was having his first start on the lightly raced four-year-old, Reward The Dream impressed racing way to an easy win at Moe on Tuesday.

Having just his second run back from a spell, the Reward For Effort gelding did a good job under the steadier of 59kg, carrying 2 1/2kg more than the runner up Schwarzlegga.

It was win number two from just four starts for the son of Reward For Effort who still has plenty to learn.

"He has been a horse who has lacked that bit of confidence in amongst them," McNeil said, adding that the chestnut was a touch slowly to begin before wobbling a little around the turn.

"But in the straight he stretched out nicely and with the way he can quicken he should win more races."

The stable's Jade Matthews agrees - "we will take him through the grades and hopefully he can go onto bigger and better things."

"He is doing a good job for a horse who is still learning."

A home-bred for the Brown family, Reward The Dream is the first named foal for the unraced Snippets mare Further Intrigue whose dam is the stakes placed That Kind Of Girl by Danehill.

Also dam of a yet to be named two-year-old by Purrealist, Further Intrigue is a great granddaughter of the outstanding European filly Mrs Penny, a Gr.1 winner on three occasions.