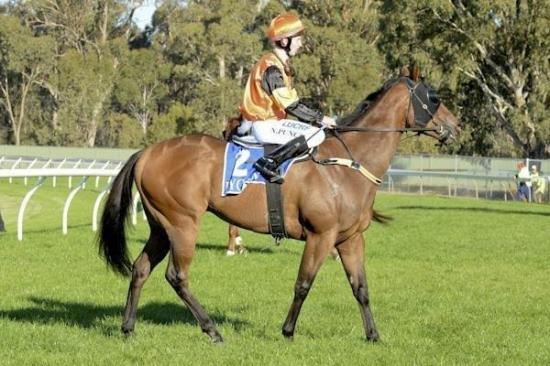 It was a very exciting finish to the finish of Friday's nights 955m challenge heat at Moonee Valley, all the more so as of the four noses locked to the line it was Grane who had his in front!

Only just beaten when flashing home in a similar race at his previous outing, Grane was a deserved winner have always promised to measure up at metropolitan level.

A seven times winner from 25 starts, amassing over $200,000 in stakes, Grane had been four times city placed so it was definitely his turn!

Settling worse than midfield of a slightly slow beginning for Matthew Allen, Grane really charged late - much to the delight of his happy owner, long time stable supporter Rosemary Thomson.

"He is absolutely flying at the moment," said jockey Matthew Allen who noted that the speed the short races are run at really suits Grane's racing style.

"He can pull a bit but they run along in these and he can build into the races under his own steam."

Robbie was very happy with the way in which Grane found the line after being pushed wide at the turn.

"Momentum is the key in these races and you need everything to go your way. I was a bit worried at the turn but once he got balanced up he really finished off well. He did a good job with a big weight."

Carrying 4 1/2kg more than the runner-up, Grane was terrific under 60.5kg and we are confident that there is more to come with the six-year-old having had only three runs this campaign.

A bargain $18,000 yearling bred by Dr Lesa Oldcastle, Grane is by Purrealist out of the imported Be My Guest mare Set Point who hails from an outstanding international family whose members include the Group One Singapore International Cup winner Epalo.