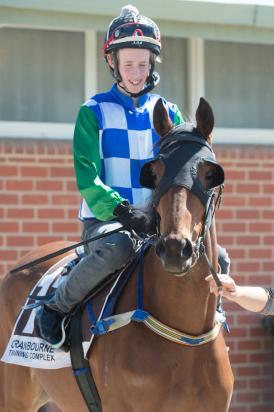 It took a few runs for Tricky Affair to find her best form, not always having the best of luck before impressively breaking her maiden at Bendigo in early October.

And at Tatura on Tuesday, rising in class and distance, she was able to go right on with the job - charging to the line after settling well back on a track playing to the on-pacers.

"The plan was to be on the speed," reported jockey Jye McNeil, "but she was in a real mood today and she bombed the start a bit."

"She was over-racing at the back and I thought that from the position we were in it would be hard to win as they were not going at a hard tempo."

"But she did a very good job to come around the field and finish off so strongly."

Part owner Frank Finlay was on course to enjoy the victory, telling racing.com that he was delighted to see the four-year-old racing in such great form.

"She played up a bit in the yard and we thought that might have been a problem for her but she did well."

"She has always shown quite a lot and this preparation she is really producing. We are very pleased with the way she has been going."

She is one of four winners produced by the city winning King Of King mares Kusha, a half-sister to the Hobart Cup winner Offenbach from the family of European champion Rock Of Gibraltar.

Tricky Affair is bred to appreciate a bit more ground and McNeil is confident that she will get further - "she really ran through the line well today."