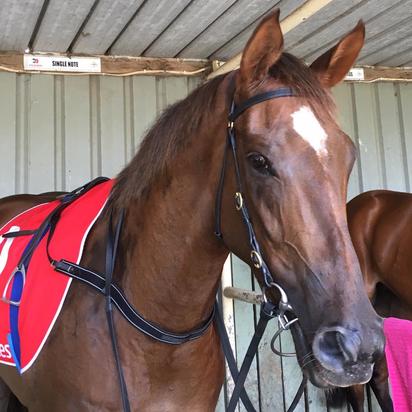 It was hard to confident regarding the chances of Loquacious Lass at Mornington on Tuesday, the four-year-old settling well back in the 1200m maiden, at times racing a little greenly with her head up and mouth open.

But there was plenty in the tank and when Craig Newitt asked her for an effort Loquacious Lass quickly responded, circling the field from just before the turn - swinging widest into the straight and letting down magnificently.

Really charging to the line, Loquacious Lass got to the lead late but was able to put a length on her rivals, winning in the style of a mare with much more to offer.

"She probably should've won her maiden by now," Newitt said, "but she's been a horse who has just kept finding trouble."

"It was a pretty good win today, she got knocked over at about the half mile and gave them all a bit of a start."

"Ridden quietly with a turn of foot like that I am sure she will win more races."

"We knew she had the ability to be competitive," the stable's Beth Schoen said, "it was just a matter of how the race was run and if things went her way."

"Once she got into the clear you could see that she was travelling the best."

Raced by Devon Park's Betty Hoare and bred by her with her late husband John, Loquacious Lass is a rather special horse being a third generation Hoare bred and raced galloper.

Also dam of the two times winner Long Juan Feng, Sublime Girl produced a Sebring filly in September and is also dam of youngsters by All Too Hard and More Than Ready.