Seeing Out The Year With A Bang! 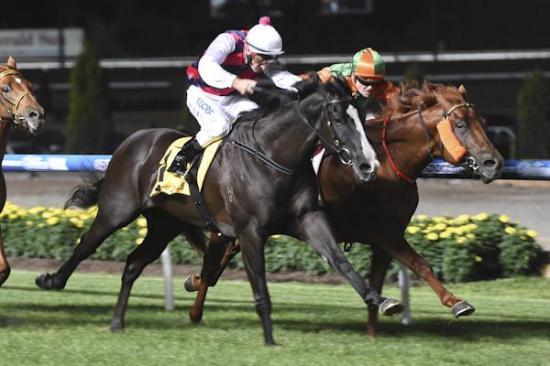 He has not quite got the amazing Moonee Valley record of stable favourite Dandy Kid (a record breaking 15 wins) but It Is Written has an undoubtable love affair with the Strathayr - on Saturday night recording his eighth win at the track.

And it was somewhat of a novel win, only his second (his maiden his first) victory at the 1000m... his first from seven attempts over that trip at Moonee Valley.

Always travelling well having taken a sit along the rails behind the leaders, It Is Written just needed a bit of luck coming into the straight and once a space appeared he was quickly to the fore, charging to the line from the 100m.

Saluting by a soft half length, It Is Written recorded his 11th win from 66 starts, increasing his impressive prize money tally to $784,423.

"He just sprouts wings at Moonee Valley," the stable's Don Healy said, "he was terrific tonight."

"He always felt like the winner," jockey Dylan Dunn - who was enjoying his first success for the stable - "it was just a matter of biding my time and weaving through the pack."

"Once he got off the back of the other horse he was never going to get beaten and I felt like he still had another gear left."

Bred by Riva Ridge Stud in South Australia, It Is Written has been a wonderful horse for connections who laid out $45,000 for him at the 2010 Adelaide Magic Millions.

A flashy son of the in-form Written Tycoon, he is out of the very good broodmare Winning Team whose six to race have all been winners. A granddaughter of the Edward Manifold Stakes winner Rebecca Gay, she sadly died a couple of years ago with her final foal Sports Writer - a full sister to It Is Written - breaking her maiden at Kyneton in December.

It Is Written was the second leg of a New Year's Eve Moonee Valley double for the stable - what a great way to see out 2016!