Dreaming Of Another Win 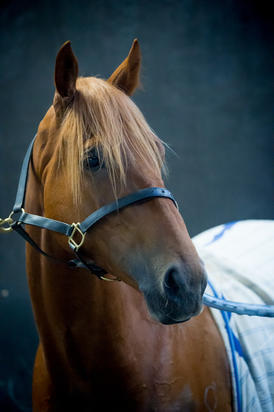 It was straight to the front for Reward The Dream at Geelong on Monday and there he stayed, the tough chestnut giving a nice kick at the turn in the Family Cup and holding on gamely when challenged over the final stages.

A horse who really knows how to find the line, Reward The Dream recorded the third win of his six start career - doing a good job under the steadier of 61kg and stepping up to the 1400m for the first time.

"He did start to get a little tired near the post under that big weight as he is not a very big horse," said in-form jockey Jye McNeil, "but he had relaxed beautifully and he kept a reasonably straight line in the run home."

Something he had not done at his previous couple of outings - McNeil suggesting that the four-year-old would benefit from the addition of winkers to his gear.

"It really helped him, he did move out a little in the run home but nowhere near as badly as he did last time."

"He had wanted to think a bit and have a look around," Reid Balfour said, "and they kept him concentrating."

"It was a good win," he added, "he did it comfortably. He can go through his grades and hopefully keep chipping away."

A home-bred for the Brown family, Reward The Dream is a son of the Blue Diamond winner Reward For Effort and the unraced Snippets mare Further Intrigue.

Served last spring by Fighting Sun, she is a daughter of the stakes placed Danehill mare That Kind Of Girl whose grandam is the outstanding UK mare Mrs Penny, a triple Group One winner.