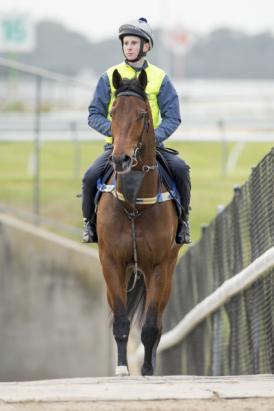 Sunday was a good day for the stable with Zero Patience breaking her maiden early in the day and a couple of races later Believing finding his best form in the 1200m BM58 event.

It was a deserved win for Believing who had been runner up at three of his four previous runs for the campaign.

"He had been knocking on the door all preparation," Robbie said, "so it was great to see him first past the post."

"We made a few changes and it was good to see that they worked."

Purchased with Peter Ford at the 2014 Inglis Premier, Believing is a son of Bel Esprit from the family of that successful stallion's best daughter, the unbeaten superstar Black Caviar.

A half-brother to the promising two-year-old Bold Kingston, Believing is out of the winning Distant Music mare Hypatia, half-sister to Bel Esprit's Listed winning sprinter Iconic.

Served last spring by Unencumbered, Hypatia is a granddaughter of the Gr.2 mare Scandinavia, dam of Gr.1 winning stallion Magnus and of Helsinge, dam of Black Caviar and All Too Hard.

Our recent two times Moonee Valley winner Scandimania also hails from (and is line-bred to) this prolific family.