Two In A Row for Believing 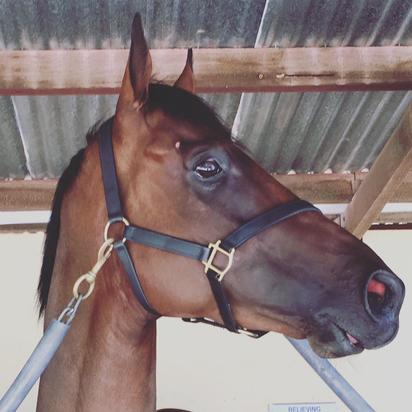 "That's the Believing we've seen on the training track at home," said the stable's Beth Schroen after the in-form four-year-old recorded his second smart victory in a row.

On the back of an easy Mornington victory a couple of weeks ago, Believing - despite a rise in class and a drop back in distance - was sent out a short priced favourite in a BM64 event at Kilmore on Thursday.

Always travelling well for regular rider Max Allen, the bay cruised up to his rivals turning, hitting the lead with 150m to go and doing what he had to do, his winning margin not a big one - but it was nevertheless a soft victory.

"It is great that he is now learning how to win," Schroen said of Believing who took seven starts to break his maiden with another ten runs between his first and second victories!

Consistent throughout that time - filling placings on nine occasions alongside his three victories - Believing has just been a work in progress and hopefully he is now ready to go right on.

"We will take baby steps with him," said Schroen, "it's just been about teaching him how to get to the line."

Allen agreed - "hopefully having won two in a row he will have more confidence going forward."

Allen noted that Believing travels a bit differently to most horses in that he is "always at his top."

"Normally you'd expect a horse going that well to win by five or six but he is already in top gear. So it's just a matter of holding him and not making a run too soon."

Hailing from the family of Black Caviar, Believing is by one of the stable's favourite stallions Bel Esprit whilst his dam Hypatia is by Distant Music who, despite being a disappointment overall, provided us with a couple of nice winners.