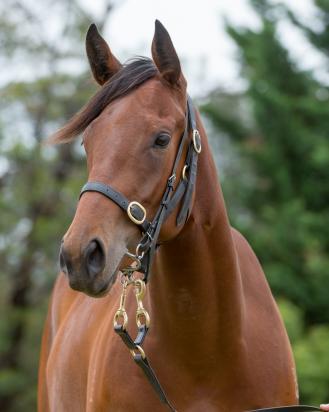 What a great record Dance With Fontein is building, the honest and talented mare at Moonee Valley on Friday evening recording the sixth win of her 19 start career.

Travelling well in second position, the bay hit the lead with 120m to go, getting clear over the final stages to win by 3/4 length with plenty in hand.

Aboard for the first time was in-form apprentice Beau Mertens who has been riding a bit of track work for the stable of late... and he was delighted.

"She jumps really well and helps herself," he said, "she just makes her own luck."

Don Healy was very happy with what he described as "a terrific ride."

"She tends to over-race a bit if she is squeezed out of the gates so I asked Beau to come out with light hands and he did just that."

"She was a bit stiff here last time," he added, "and she had come on since then."

A wonderful 'great value' story, Dance With Fontein cost just $2000 at the 2014 Inglis Melbourne VOBIS Gold Yearling Sale and she has amassed over $162,000 in stakes.

Bred at Blue Gum Farm, she is a daughter of Group One winning sprinter Turffontein and the two times winning Geiger Counter mare Nuclear Dance.

Dance With Fontein was the first leg of a Moonee Valley double for the stable, Deja Blue also in winning form on a big night!