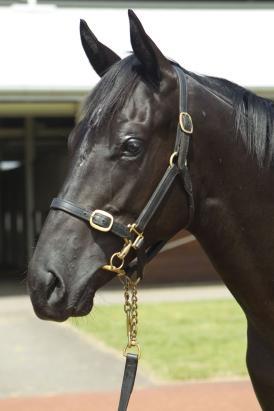 It was a well deserved break through win for the promising Fast Stryke at Moonee Valley on Monday, the flashy three-year-old having been a game runner up at four of his first five starts with his other run a third on heavy going.

Showing good pace to sit second with the blinkers added, Fast Stryke joined the leader turning, putting ground on his rivals into the straight and stretching out well along the rails to hold of favourite Tenappy Ladies by 3/4 length.

"He gave me a really nice kick turning," jockey Jye McNeil reported, "although in the straight he still wasn't sure what to do - he is still learning how to flatten out and attack the line."

"Hopefully he can take a lot of confidence out of this win."

"I think he has got plenty of ability," Healy said, adding that "he has just needed to put it altogether. He has had excuses for every defeat but everything went right for him tonight."

Bred by Bolton Angus Stud, Fast Stryke is a son of Stryker and the King Charlemagne mare Amaudru who was also a winner at Moonee Valley.

Served last spring by Street Boss, Amaudru hails from a family well known to us with her stakes placed half-sister Suraya (dam of Listed winner Spinning Jenny and the stakes placed Moonee Valley specialist Philda) being the dam of our Newmarket Handicap hero The Quarterback.

This is a family that has been producing quality performers for generations, its other members including the stakes winners Philippi, Grande Rosso, Vionnet, Academe, Vionneto, Cheverny, Fashion News, La Chasseuse, Prima Cornice and successful stallion Baguette.