On A Winning Curve 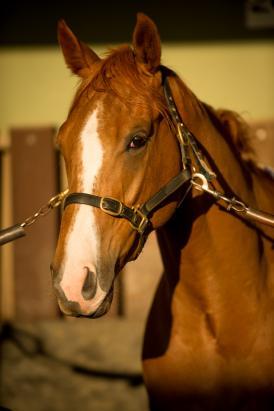 What great form Curvano has been in of late, the tough and honest chestnut at Pakenham on Thursday night recording his third success from his last five starts.

A horse who just doesn't know how to run a bad race, Curvano has not finished out of the first five in nine starts and judging by the strength of this latest success there is still more to come.

Stepping up in distance and rising in weight, Curvano showed good speed from the outside gate, doing a bit of early work out wide before taking his position outside the leader.

Engaging in a two horse war all the way down the straight, Curvano stuck his nose out where it mattered, getting the upper-hand over the very final stages of the 1400m contest.

"He only does what he has to do," jockey Jye McNeil noted, adding that he thinks that the son of Equiano may in time "get over a bit further."

The stable's Jade Matthews was on course with a big group of happy owners led by Curvano's breeder Dennis Malcolm, a long time supporter of the stable.

"It was really exciting for his owners," she said, noting that Curvano "really fought hard. It was a very tough win."

A half-brother to his promising stable mate Toorak Miss, Curvano - a son of Swettenham Stud's Group One sprinter Equiano - is one of nine winners produced by terrific mare Curvaceous Miss.

A daughter of the Group One South Australian Oaks winner Heavenly Body, she is also dam of the metropolitan winners Emankey and Dashing Miss as well as the city placed provincial winners Baltic Spirit and Magic Curves.