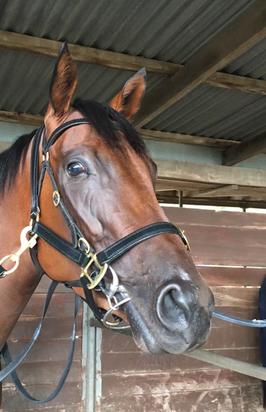 "Separee won't give it up," said Terry Bailey as the tough stuck her nose out to win in particuarly gutsy fashion at Seymour on Thursday.

On pace throughout, vying for the lead with a couple of others, Separee hit the lead early in the straight and at the 200m had three others coming at her - but she just kept digging!

"We jumped from a nice barrier and had to be a pair closer than planned and be exposed," jockey Jye McNeil reported, "but she travelled well, she gave me a really good kick at the top of the straight and she was in for a real dogfight in the straight."

"When the leader fought back she was very tough," he said, adding that " she is only small but she's really good at these little trips."

"It was a terrific win," Robbie Griffiths said.

"She has taken a while to learn what it is all about but she has always shown talent so it is nice to see her put it altogether."

"Jye rode her well and got everything from her in the final stages, she really toughed it out and I am sure there are more wins in store for her."

The winner of two of her last three starts from a total of just seven career outings, Separee was bred by her part owners Burnewang North, the picturesque property own and run by Cathy Hails whose father David famously owned the great Kingston Town.

A daughter of Sepoy, Separee is out of the imported stakes placed Royal Applause mare Maree Basse.