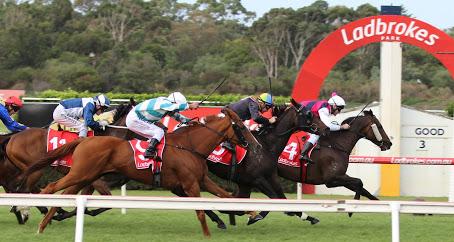 "He is having a nice preparation," Robbie Griffiths said of Le Boss who was strong to the line breaking through for his first metropolitan victory at Sandown on Wednesday.

Nice indeed, the four-year-old racing nine times this time in, recording two wins and three placings and with this latest success over 1800m showing that he has the scope to get over a bit of ground.

"He is out of a Zabeel mare and we have always thought that distance would suit him," Robbie said, noting that Le Boss "has been a bit of a slow maturer."

It was a particuarly special win for Robbie with Le Boss being raced by a number of long time stable supporters including racing manager Don Healy who has been part of the team "since day dot."

"Deane Lester is also part of the ownership and he did the speed map for the race which Brad (Rawiller) followed and it all worked out well!"

Settling fourth/fifth along the rails, Le Boss travelled nicely throughout though his rider admitted that he was a little concerned when a split came so early in the straight.

"If anything he took the gap too quickly and got left alone in front a fair way out," Rawiller said.

"I was a bit concerned at the 100m when they were coming at him but he was holding them, he did a good job - and he will only be better once he gets up to 2000m."

A son of The Quarterback's sire Street Boss bred by Bowness Stud, Le Boss was a bargain $28,000 yearling spotted by Robbie and Peter Ford at the 2014 Inglis VOBIS Gold Sale.

A full brother to fellow city winner Zaboss, he is out of Zachelle, a half-sister to the Singapore Group Two winner Itmaybeyou from the family of French Derby winner Lawman.