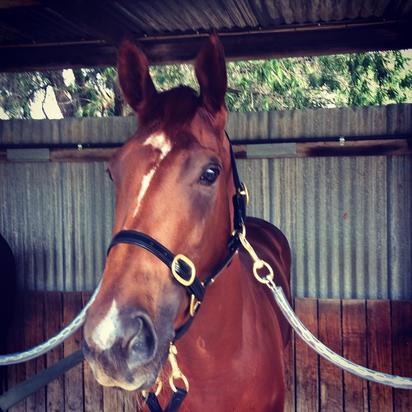 It is never easy to be the first horse sitting wide in the field, especially when the horse is an inexperienced debutant. To win, let alone win as easily as did Divine Quality at her Bendigo debut on Wednesday, is the sign of a good horse.

"I was a little bit concerned sitting three wide," admitted jockey Brad Rawiller, "but she came back under me and got into a beautiful rhythm and travelled easily."

Racing clear in the run home to win by a soft three lengths, Divine Quality was, as Brad said "very impressive!"

"She is a lovely filly and she ran right through the line which is a good sign."

Giving Brad a great feel heading around to the gates, Divine Quality did, he reported "get a bit hot behind the barriers."

"It's her first start, there was a big field of horses there, but she was very relaxed to that point, she just sweated up a bit late."

Don Healy had been impressed by Divine Quality's race day attitude, noting that she travelled well throughout a three hour float trip and didn't let anything faze her ... "she has been terrific, a real little professional."

"We have always thought that she had a fair amount of ability," Don added, "she has just been slow maturing but her work at home has been really good. She is a nice filly."

Bred by Uluru Stud and purchased by Robbie with Princeton Stud at the 2015 Magic Millions, Divine Quality is by Darley's four times Group One winner Sepoy out of the winning Fastnet Rock mare Nun Faster.

Served last spring by Vancouver, Nun Faster - also dam of the three times winner One Faster - is a half-sister to the Listed winning sprinter Vatican from the family of NZ 2000 Guineas winner King's Chapel.