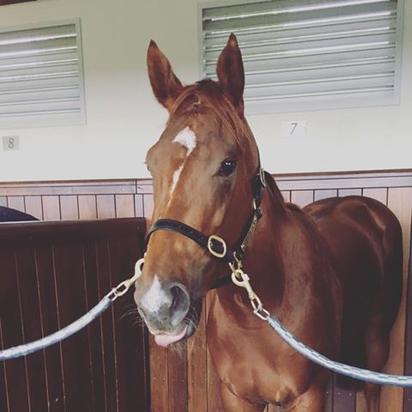 One of our most loyal owners, Craig Pearce noted on Saturday that it was quite a feat for Divine Quality to step "straight up from a maiden to Headquarters" and we could not agree more - it as an exciting performance!

So impressive when saluting at her Bendigo debut by three lengths that she was sent out favourite at Flemington on Saturday, Divine Quality rewarded her supporters with a stunning victory.

Always travelling well, not at all overawed by her first run down the famed Flemington straight, Divine Quality was bolting at the 400m and from the 200m she drew clear to win by a soft 3 1/4 lengths.

"She is very professional," enthused the stable's Don Healy.

"She settled nicely in the run and was always travelling like the winner. There is a similar race here in two week's time and after that we can start to think about getting her some black type."

"We have been really patient with her," said Craig Pearce.

"She stepped out at Bendigo and did everything we hoped and today Beau (Mertens) did everything we asked - to get her a bit of cover early. We thought if she could handle the straight she'd finish off well and she did - like a good horse, we are really rapt!"

Purchased by Craig's Princeton Stud with Robbie at the 2015 Magic Millions, Divine Quality was bred in Victoria by Uluru Stud. She is a daughter of Sepoy and the winning Fastnet Rock mare Nun Faster, also dam of three times winner One Faster.

Served last spring by Vancouver, Nun Faster is a half-sister to the stakes winning sprinter Vatican from the family of NZ 2000 Guineas hero King's Chapel.