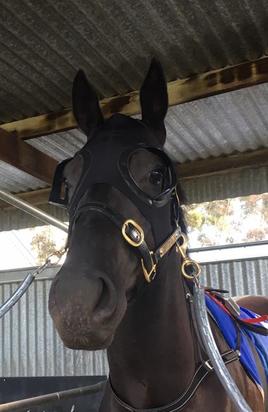 It was a much deserved victory for the consistent Fast Stryke at Echuca on Monday, the flashy dark brown gelding having been runner up at each of his three previous outings for the campaign.

A winner at Moonee Valley in mid-March, the son of Stryker is yet to miss a placing in ten starts - always trying his heart out but still learning just how to put them away.

"He had just been getting his head up," rider Max Allen explained - "he just hasn't known how to hit the line."

But he is starting to learn, his second victory a dominant one. Jumping fast from a wide gate, he was eased back to fourth, sitting wide but always travelling well.

Cruising up to his rivals early in the straight, Fast Stryke hit the lead at the 200m, drawing clear over the final stages to win by half a length with plenty in hand.

It was a good effort under the considerable steadier of 62kg and there is no doubt that Fast Stryke has more to offer.

"I thought he would be too good for them today," Allen said, "he has a good motor."

"It was nice to see him be the bride instead of the bridesmaid," Beth Schoen said - "he had certainly been knocking on the door!"

Hailing from the same family as the stable's Gr.1 Newmarket Handicap winner The Quarterback, Fast Stryke is out of the city winning King Charlemagne mare Amaudru who was served by The Quarterback's sire Street Boss last spring.