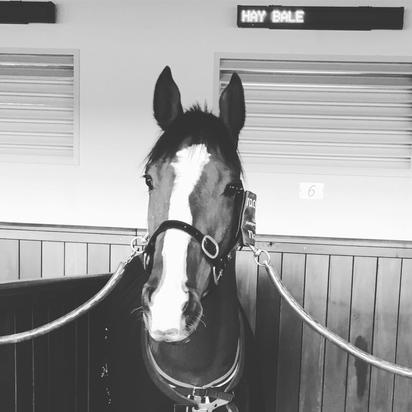 A game second at Listed level at his previous outing, Hay Bale was a deserved winner of the Event Staff Handicap at Flemington on Saturday... the stable's 99th success for the season!

Settling well on pace for in-form apprentice Ben Thompson, Hay Bale joined the lead with 200m to go and from the 100m he had it won, bursting clear to win by half a length with plenty in hand.

Thompson was delighted to win on Hay Bale having been on the gelding at his previous outing where he was a touch unlucky having been forced to the front a tad early... "I was hoping for a bunny that day," Thompson said, "he just had to take up things a long way out."

That effort gave Thompson confidence that Hay Bale was due a win and he admitted to "pleading with Robbie for the ride!"

"So I was happy to get the win up for him," he said, adding that Hay Bale "has got a really nice turn of foot and he showed that today."

"His last three runs have all been good so it is terrific to see him break through. His owner has been very patient with him and got the reward today."

"He wanted to lay in a little bit but Ben got him into a nice spot, into a nice even rhythm."

Providing he pulls up well, Hay Bale may back up in Saturday's 1400m VOBIS contest or otherwise be saved for a return to Flemington in mid-August.

A home-bred for Tony Penglase, Hay Bale is a son of former Swettenham Stud shuttler Canford Cliffs and the Estambul mare La Lady. Served last spring by Puissance de Lune having foaled an Americain filly last October, she is a half-sister to the dual stakes winner Verco Road from the family of Australasian Oaks winner Send Me An Angel.

It is an interesting exercise to google a photo of the great stallion Lyphard and hceck out Hay Bale's similarities in looks to the horse he is line-bred 4 X 5!