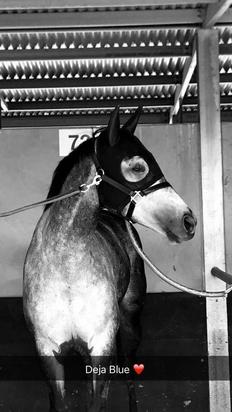 Everyone with a talented mare hopes that they can measure up to black type and we are thrilled that the owners of Deja Blue were able to realise that dream when the terrific grey stuck her nose out to claim a tough victory in the Listed Rosemont Stud Stakes at Geelong on Wednesday.

A mare who contested several stakes races last time in - never far away - Deja Blue has come back all the stronger this time in and she did a great job to win the 1200m contest at just her third run back from a spell.

Robbie had been happy with Deja Blue's form leading into the race, noting that "she ran a really good race first up and I was not worried about her second up run which I thought was okay under the conditions."

Beaten only 2 3/4 lengths when resuming in the Gr.3 How Now Stakes, Deja Blue was again close up under a big weight at Bairnsdale.

Enjoying carrying a lesser load on Wednesday, Deja Blue however looked to have the job ahead of her having drawn the second outside barrier in the field of 15.

"It looked to be a massive task when the barrier draw came up," Robbie said, "we were worried about having to use her up - but we made the decision to go forward and Jye rode her perfectly."

It was the fifth time that Jye McNeil and Deja Blue have successfully combined and he was proud of his charge.

"With the amount of work we had to do to get across, I was expecting her to be a little bit vulnerable late but to her credit she was very brave," he said.

"I am rapt with Robbie and the owners, they have stuck with me the whole way through and it is great to get some black type for her."

"She had been so close to black type and to achieve that goal today is just fantastic," Robbie enthused.

"She has been such a good mare," he said, adding that despite watching at the finishing line, he thought Deja Blue had been pipped at the post.

"I thought she had run second but I was just happy to get black type - to win is a bonus!"

"She had an extended preparation over the summer and was probably on her way down when she tackled those first stakes races. But today everything worked out well."

A bargain purchase at the 2014 Inglis Melbourne Premier Yearling Sale, Deja Blue is a daughter of Denman whose grandsire Octagonal is a descendant of the famed race and broodmare Mumtaz Mahal.

And that famous grey is Deja Blue's tenth dam - and has passed on her distinctive colouring through the generations to her talented descendant.

Deja Blue hails from a strong branch of the prolific Mumtaz Mahal family, her fifth dam being the champion Petite Etoile.

She is the second black type performer (the stakes placed Triple Gold by Teofilo the other) for the imported Gone West mare Miss Chaski who was served last spring by Delago Deluxe. Also dam of the dual city winner Distant Dreams, she is a daughter of the UK stakes winner Zelanda.