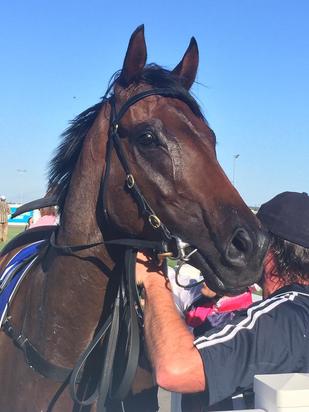 It had been a while between drinks for Gershom but it was good to see the honest four-year-old back in winning form at Kilmore on Tuesday.

Looking nicely placed in the 1100m BM58 event, the bay was sent out favourite and was always travelling well for regular rider Matthew Allen.

Jumping well and scooting up along the rails to sit inside the leader, Gershom then took a sit, getting into the clear turning and quickly hitting the front - able to easily hold off all late challengers.

"He is a horse who started his career off pretty well," Allen said of the gelding whose victory was his second from 13 starts and his first since January - "and he has had legitimate excuses on a few occasions. But he has always been a model of consistency."

"I took the bad luck out of it today but had to go a bit earlier than I wanted and he just waited a bit late."

"He is not an overly confident horse," said the stable's Jade Matthews, "and he has not always had everything go his way."

"But that should boost his confident today, he should go on well now."

Describing Gershom as a "very quiet, easy going horse," Matthews said that the son of Moshe "is just a beauiful animal to have around, he is one of those you don't even know is there!"

Bred by Cloverlea Farm who have enjoyed a recent rush of winners, Gershom was purchased by Ampulla Lodge at the 2015 Inglis VOBIS Gold Yearling Sale. He is one of four winners for the Encosta de Lago mare Barella Sorella who had plenty of speed but unfortunately issues with her feet.

Producing a filly by Ready For Victory in mid-October, Barella Sorella has produced three other winners and she hails from a strong local family whose members include the stakes winners Opening Twist, How Proud, Lemon Sorbet, Berberia, Chattanooga, Ascorbic and Spanglet.