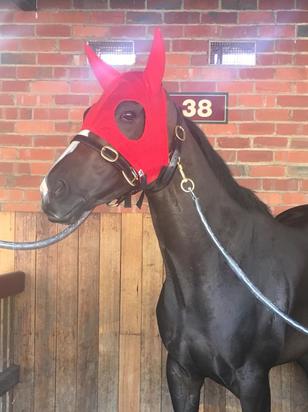 There were a couple of roars at Caulfield's twilight meeting on Wednesday, firstly as Classic Diva crossed the line in the Ladbrokes Handicap and again when she returned to scale - greeted by a large and very happy group of proud owners.

A mare who had been racing without luck - in jockey Chris Caserta's words "she had been running up other horse's bums!"- Classic Diva covered ground from a tricky gate in the 1600m contest but was always travelling well.

Wide into the straight, Classic Diva had a bit of work to do as Kaimu, carrying 2.5kg less, shot clear. But our gallant girl was not to be denied, getting closer with each determined stride and from the 50m she was able to get away from them, her winning margin an impressive 3/4 length.

It was win number three for the four-year-old whose record should, Robbie Griffiths said read even better.

"She has been so unlucky," he said, "but she has great talent. Her last few runs are better than they look on paper and we were quietly confident that things might work out for her today... and they did!"

"We got a nice cart up out three wide," Caserta said. "It was just a matter of getting out at the right time and she did the rest, she hit the line well."

There are seven syndicates and 12 individual owners involved in Classic Diva. Little wonder she receives such a great reception when she wins as all up as she has 69 owners!

One of which is the stable's own Cheryl McCarthy who was beaming, noting that racing a nice horse with such a big group is an exciting experience.

"It takes a lot of people to make this happen so it is awesome to share it with so many; we all enjoy the moment and appreciate what it takes to get a horse over the line!"

One of the syndicates involved is Frank The Tank, a reference to Will Ferrell movie Old School. This has been a theme over a bit of time; other syndicates including Ricky Bobby Racing, Jackie Moon Racing, Ron Burgundy Racing, Magatu Racing and Kicking & Screaming Racing. And it has been a lucky theme with each of these groups racing winners!

Bred by Hillside Thoroughbreds and purchased by Robbie at the 2015 Inglis Melbourne Premier, Classic Diva is a daughter of the late High Chaparral and the imported Danehill Dancer mare Classic Music.

Served last spring by Hinchinbrook having produced a Vancouver filly in October, Classic Music - also dam of metropolitan winner Tenorino - is a daughter of one of the greats of the UK turf, the outstanding sprinter Pipalong.