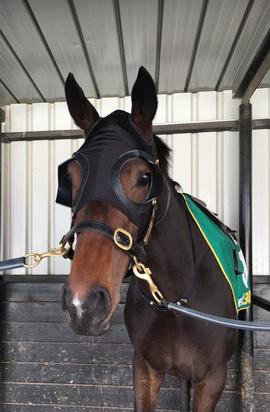 Settling back along the rails from the inside gate at Geelong on Tuesday, Clever Dolly was always travelling well for Jye McNeil but needed luck coming to the turn with a wall of horses in front of her.

And fortunately the splits came at the right time and Clever Dolly was so game taking them, weaving through the field and really charging late to break her maiden at her ninth outing... doing a good job dropping back from 1736m to 1300m.

"She just didn't quite run out the trip last start," the stable's Beth Schoen reported, "so we thought we'd freshen her up and bring her back in distance."

"She has been her own worst nightmare," she continued, "she has always overdone things a bit but it was great to see her relax today and really hit the line hard."

"The key was the drop back in distance," Jye McNeil agreed thought he admitted that things did not go to plan in early the early stages of the race.

"I was expect her to be a bit closer but the way things worked out we were a couple of pairs further back than anticipated... but she finished off really well."

Raced by her breeders Bridsan Bloodstock, Clever Dolly is a daughter of the in-form Domesday and the unraced Woodman mare Clever Clogs. Served last spring by Kuroshio, she is a half-sister to the two times Group One winning Macau galloper Golden Gunner.