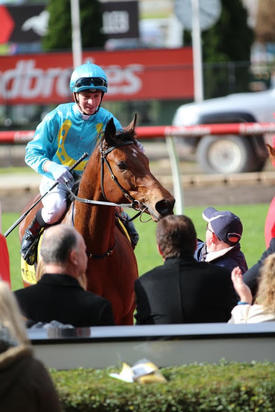 It was straight to the lead for Single Note at Moonee Valley on Saturday - and it was there the tough and game mare stayed, kicking strongly when challenged by Hectopascal over the final 150 - pinning her ears back in determined fashion.

What a grand mare she has been for the stable and for connections, this latest success the eighth of her 36 start career and her fourth at metropolitan level, increasing her prize money tally to beyond $250,000.

"She has won a lot of races for us and given us a lot of joy," Robbie said, noting that this is her final preparation before she heads off to stud in the spring.

"She handles the wet so well so we will probably race her though the winter - and we are going to enjoy every run she has left!"

Whilst Jye McNeil had ridden Single Note on several occasions, it was his first win on the five-year-old and he was delighted.

"We had a lovely run today, she is a really good beginner who puts herself in the race - and as we saw today she can control the race."

Describing Single Note as a "very tough" mare, Jye added that "she is always in for the fight."

A 3/4 sister to stakes winner Gold Force, the daughter of Not A Single Doubt is out of a half-sister to the triple Group One winner Mentality from the family of stakes winners I'm All The Talk, Straturbo, Fara's Team, Concern, Tennis Lady and Black Widow.