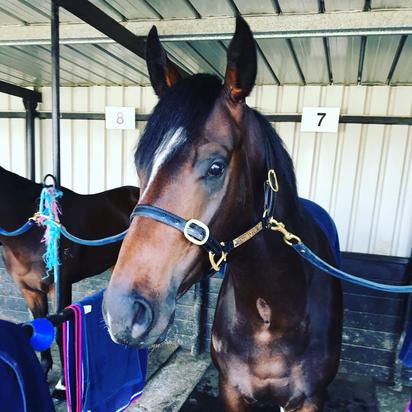 Little wonder that Ardee was sent out favourite at Geelong on Friday, the lightly raced and promising two-year-old having run so well at his first two starts and enjoying a drop in class having been close up in a Swan Hill juvenile feature.

It was a long day for a young horse that day - the float trip up and back - and Robbie had in mind to spell the well related son of champion stallion Redoute's Choice after that but he pulled up just so well.

"He did a good job to bounce back from that run," said the stable's Reid Balfour, "and he was great today. He was well rated in front and had a good kick."

"He is a reasonably relaxed horse," he added, "so he should be able to step up a bit in distance at some stage."

Jockey Ben Thompson agreed - "he has always struck me as a miler type," adding that "he is really nice colt."

"He definitely took benefit from his first two runs and he is a real professional."

"He jumped really well and I didn't want to try and drag him back and get him out of rhythm so I was happy to use that bit of extra petrol on a fit horse knowing what he was capable of."

Having a rival runner kicking up inside of him for the first 400m, Ardee did have to do that little bit of work but once in the lead travelled well - finding plenty and showing good heart when challenged over the final 200m.

A home-bred for Gerry Ryan, Ardee is out of the Group 3 placed triple city winning Anabaa mare Le Societe. Served last spring by So You Think having produced a colt by that dual W.S Cox Plate winner in October, she is a daughter of the New Zealand St Leger winner Ritzy Lady.