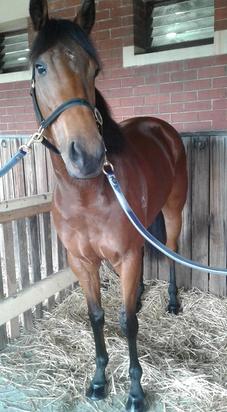 Barrier 13 was always going to be a tricky one for Zarpoya at Caulfield on Saturday and her chances in the Keno Kwikpik Handicap were not enhanced when she jumped so well from the gates - ending up doing a fair bit of early work and settling wide.

Approaching the turn without the luxury of cover in the 1100m contest, Zarpoya nevertheless pinned her ears back as she chased down the leaders - so gallant putting her nose out right on the line.

In doing so recording the third win of her 17 start career, Zarpoya broke through for her first success at metropolitan level and whilst she was big odds (50-1!) her victory was no real surprise on the back of encouraging lead up form.

"Luke Currie was really upbeat about her last run," Robbie said, referring to Zarpoya's fourth in similar company at Moonee Valley a couple of weeks ago. "We were a bit worried about he barrier today but Dwayne Dunn gave her a good run so all good!"

Having his first ride on the daughter of Sepoy, Dunn noted that the filly "has taken big leaps forward at her last couple of runs - and she was a bit unlucky not to have run second last time."

"It was a good effort today," he added. "She had no favours from the gate but she was tough and she really dug deep late."

The win came at Zarpoya's tenth run for the preparation with Robbie noting that "the beauty of our stables at Cranbourne, there are so many different things we can do with horses and we can therefore get a lot of runs out of them - which is evident in how this filly has held her form."

Zarpoya was welcomed back to scale by an enthusiastic group of owners including Australian Trainers Association CEO Andrew Nicholl and Robbie's wife Shiranee. Another part owner - retired race caller Greg Miles - was cheering on from afar, currently enjoying a European holiday.

"She is raced by a good group of people who have been stable supporters for a long time," Robbie said, "and she has given us a lot of joy."

Bred locally by Woodside Park Stud, Zarpoya was purchased by Robbie with Peter Ford at the 2016 Magic Millions. Stakes placed at two, she is out of the imported Rock Of Gibraltar mare Zarzuela.

Served last spring by Zoustar having foaled a Written Tycoon colt in September, Zarzuela is a half-sister to the Gr.1 Mackinnon Stakes winner Glass Harmonium from the family of fellow big race winners Blond Me, Conduit, Spectrum and Petrushka.