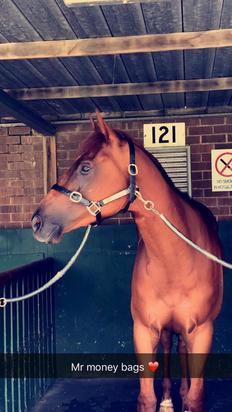 Finals Day at Flemington is always a highlight of winter racing and it was exciting to win one of the day's feature events - the Silver Bowl Final - with the consistent and talented Mr Money Bags.

A horse who had not enjoyed the best of luck (wide from outside barriers at his two previous starts) in the lead up, Mr Money Bags had everything go right this time - always travelling well from a better draw for Jye Mc Neil.

Jumping well before enjoying a lovely trail third along the rails, Mr Money Bags peeled out into the clear in the straight, hitting the lead with 200m to go and getting clear from the 100m - easily holding off a late charge from Mount Kilcoy.

The race had been a long term plan for Mr Money Bags who may now press on to the $150,000 VOBIS Gold Reef at Caulfield at the end of the month.

"We will take advantage of those bonuses," Robbie Griffiths said, adding that "and he is a Magic Millions horse so he may even end up there in January."

Griffiths had been confident leading into Saturday, with Damian Lane having reported that Mr Money Bags' previous run had been full of merit - "he said he was fantastic when everything went wrong."

No bad luck to report this time, Jye McNeil always happy - "we were able to follow the right horse into the race and had a lovely run in transit."

Mr Money Bags was greeted back to scale by a large and enthusiastic group of owners including one splendent in a bright yellow suit to match his horse's silks.

A son of Written Tycoon purchased for just $25,000 at the 2016 Magic Millions, Mr Money Bags is out of the city winning Dubai Destination mare Biggietupac who sadly passed away last spring.

The dam of yet to be named youngsters by Magnus and Love Conquers All, Biggietupac was a half-sister to the durable stables winner Tramuntana (ten wins) out of the stakes placed Success Express mare Hip Hop.