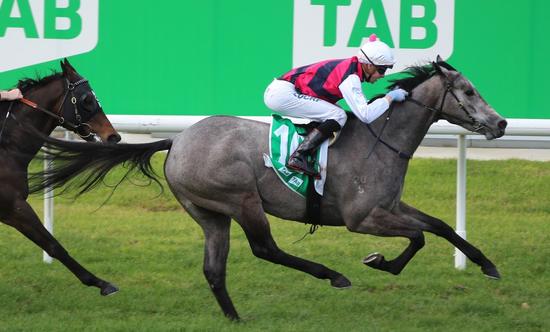 A sunny winter meeting at Cranbourne may have unveiled our latest stable star with debutant Fidelia winning in such a way that Robbie said that "she could not have been more impressive."

Missing the start, the exciting grey recovered within only a couple of strides, taking a nice position fourth along the rails and always travelling well for Jye McNeil - just needing a bit of luck coming to the turn.

Fortunately the splits came early in the straight and Fidelia was quick to take them, getting into the clear from the 200m and over the final 100m really charging, getting clear late to win by a soft 1 1/4 lengths.

"She is very good," Robbie enthused, happy to see Fidelia take her track work form to the races.

"She has always shown great talent but she has had limited experience which was indicated by how she missed the start - but Jye just let her flow along and when the opportunity arose she showed good character."

Owned by a big group of happy owners - many who made the trip out to the track (lots of smiling faces post race!) - Fidelia caught Robbie's eye on the day the stable won the Adelaide Magic Millions with Undoubtable Miss.

Like that talented filly, Fidelia is a daughter of Redoute's Choice's terrific son Not A Single Doubt and she was, Robbie recalled "the best filly at the sale."

Confident that Fidelia can "go through her grades pretty quickly," Robbie is looking forward to testing the filly at metropolitan and hopefully later on, stakes level.

Jye McNeil had not ridden Fidelia before and was impressed - "the feel she gave me is that she is probably up to stakes grade," he said.

"She bombed the start and I thought it was going to be awkward for her but she mustered speed to put herself in a good position. When I asked her for her effort her legs went everywhere but she still did it easily."

A great granddaughter of the Gr.1 mare Pure Of Heart, Fidele was served last spring by shuttler Bobby's Kitten having foaled a Smart Missile filly in late September.