Two Out Of Three For No Alibi 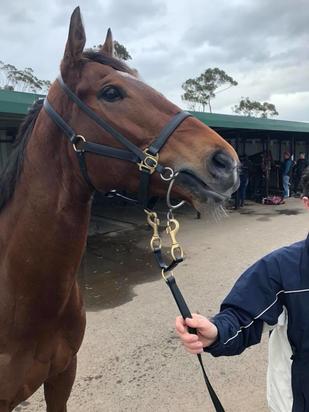 For a stride or two things were a bit tight for No Alibi at Geelong on Tuesday but once a split came for the tough three-year-old she was off and away - easily recording her second win from her last three starts.

It was a bit different from her latest all the way victory at Pakenham in late July, the bay this time taking a sit, letting the action unfold in front of her as she settled nicely along the rails for Andrew Mallyon.

"She gave me a great ride and the race panned out really nicely," Mallyon reported, joking that "if only it always worked out like that!"

"They didn't go really fast but enough to give me a chance to really relax and she had plenty of petrol straightening up - it was just a matter of getting the room and she did the rest."

The stable's Reid Balfour was pleased to see No Alibi win for "a really loyal group of owners."

"She has been a little bit one dimensional in the past so it was good to see her add a string to her bow - that she is progressing mentally enough to settle in behind them, that will help her in the long run definitely."