Time For A Party (Dress) 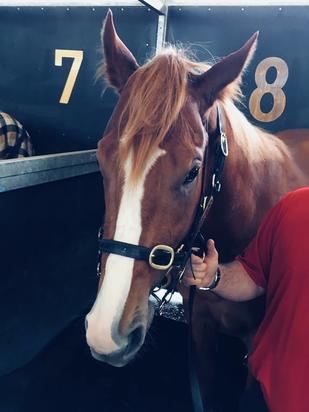 He may have done a bit wrong when running last at his debut in a Blue Diamond Preview back in January but Robe de Fete was all professional when recording an impressive first up victory at Pakenham on Thursday.

Not surprising considering the drop in class, the handsome chestnut was sent out favourite in the 1000m contest and, after recovering off a tardy start to sit midfield along the rails, he was always travelling well.

And when a run came along the rails as leader Billabong Bilby gave a kick, Robe de Fete was quick to take it - hitting the front with 200m to go and drawing clear to win by an impressive two lengths.

"He was very tractable today which stands him in good stead for the future," reported the stable's Reid Balfour, adding that "he has got plenty of talent, hopefully it is all ahead for him."

Hanging out badly turning when having his first start, Robe de Fete was much improved back from his break though things did not go to plan early - "he ended up further back than expected," Balfour said, "but once he got clear in the straight he showed what he is made of."

A graduate of the 2017 Inglis Easter Yearling Sale, Robe de Fete was bred by Fairview Park Stud by the ever reliable Choisir who during the week was represented by his 100th winner for the season.

Named after his dam Party Dress (Robe de Fete in French!), this promising colt is a descendant of the acclaimed matriarch Marchetta whose descendants include the influential stallions Turn-To, My Babu, Alycidon and Irish River.