One For The Black Booke 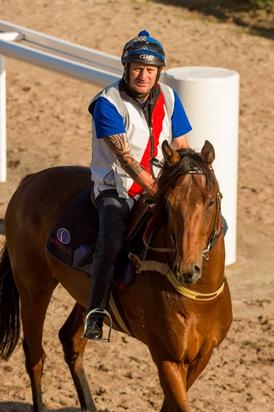 Having run so well at debut it was little wonder that John Booke was favourite to take out the 1100m maiden at Warrnambool and he did so in the style befitting such a well fancied horse.

Always travelling well on pace for Andrew Mallyon who was also aboard the promising three-year-old when he ran such an encouraging second at his first start, John Booke was a bit raw but he gave a good kick in the run home to salute by 1 1/4 lengths with plenty in hand.

"He gave me a nice feel in his jump-outs and he was very green and new at his first start," Mallyon reported, adding that "he obviously took a lot of improvement from that run."

"He has still got a long way to go," he continued - "he had a good look around in the straight."

"He is still a big baby but he gives every impression that he has definitely got a motor, he is a horse who I think will progress to metropolitan racing - I've got a fair bit of time for him."

A home-bred for the Benson family who race him with friends, John Booke is a son of the Blue Diamond Stakes winner Star Witness and the multiple city winning Bel Esprit mare Bella Dolce.