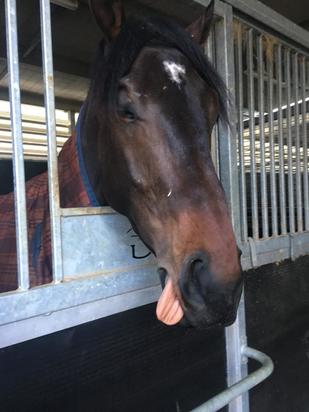 He is big, he is bold and best of all he is good - very good!

Our exciting three-year-old Alessandro who was so impressive rising in distance at Cranbourne on Sunday, at just his third start taking on the older horses and giving them a start in the 2025m BM64 event.

Drifting back along the rails, the son of Melbourne Cup hero Fiorente travelled well for Ben Thompson but when the sprint went on approaching the turn those in the back of the field were left momentarily flat-footed.

maneuvered him out into the clear. By this time favourite Storm Harbour was making a strong run but once our boy was balanced it was obvious that he was going to be the one to beat.

Really stretching out over the final stages, Alessandro swamped his rivals in the style of a horse going places - and we are hopeful that said place is Flemington on Derby Day!

"His whole preparation has been geared towards the Derby," Reid Balfour said, adding that the Geelong Derby Trial is next on the agenda.

"We missed a run in the Derby Trial at Flemington so we had to come here but it has worked out well."
"He is bred to run two miles so the Derby trip won't be a problem."

"Robbie told me before I rode him that he had a lovely Derby horse," Ben Thompson who has been aboard at each of the horse's three runs and two victories.

"He has got the looks and the attitude and he has improved with each run he has had. He is so clean winded, no doubt he is an exciting horse and it will be lovely to have him in the Derby."

Boasting a fascinating pedigree with multiple strains of the prolific Simon's Shoes family from which his sire and dam (and his dam's grandsire Sadler's Wells) all hail, Alessandro is the second foal for the imported Galileo mare Galivant whose first is the promising Skelton.