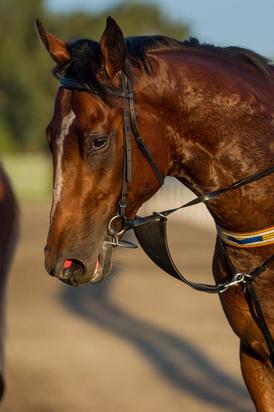 It may be a long way from Stawell to the Sandown Guineas but we are hoping that is the destination for Igniter who was tough to the line breaking his maiden as an odds-on favourite over 1300m on Monday.

Having just his fourth start on the back of a most unlucky run at Bairnsdale, the good-looking bay jumped well for Linda Meech and was always travelling like the winner outside the leader.

There was a bit of a challenge in the straight as the leader kicked back but Igniter got the upper hand late and whilst the winning margin was not a big one, the young horse did look to have plenty in hand.

"I was happy where he was," Meech reported, "and he did everything right during the run."

"He is a lovely, cruisey sort of chap - maybe a bit too cruisey for my liking!" she laughed, noting that it took him a few strides to put the race away - "but he is a colt and they can be like that."

"It took him most of the straight to get the job done but it is just nice to get the win on the board as he has not had much luck so far."

"He was still a bit green today, there was a bit of wind about which he probably didn't appreciate but that win will give him a bit of confidence... he probably has to do a bit more in regards to the Sandown Guineas but there are some races over the carnival for him and we will try to head that way."

Morganti was delighted with Meech's ride - "we engaged her because she knows this track so well and she took a lot of bad luck out of the equation being where she was."

An expensive purchase at the 2017 Inglis Easter Yearling Sale, Igniter is by champion stallion Snitzel out of the unraced King's Best mare Royal Glow, half-sister to the Gr.3 winners Red Colossus and Nediym's Glow.

Not having a great deal of luck at stud of late with her most recent foal being a yet to be named Exceed And Excel two-year-old filly, Royal Glow is also the dam of stakes winners Kinglike and Mirage.