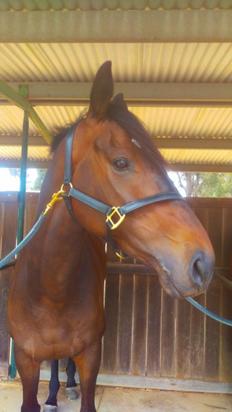 What a tough maiden victory it was recorded by Dolce Boy at St Arnaud on Saturday, the lightly raced five-year-old taken to an early lead by John Keating as he raced over 2000m for the first time.

So unlucky having been trapped wide throughout over a mile at his previous start, the bay started to up the tempo from the 600m - a clever ride by Keating seeing many of the horse's rivals off the bit and chasing from well before the corner.

Having not made the turn especially well, Dolce Boy for a few brief moments looked in danger of defeat - and along the rails making a strong run was The Banana Stand who got his nose in front for a couple of strides.

But Dolce Boy just kept fighting and towards the line was drawing clear, his winning margin a solid 3/4 length.

"It was great to see him break through for a well deserved win," Robbie Griffiths said, adding that "the extra distance and the application of blinkers helped get him over the line."

A home-bred for the Alateras family, Dolce Boy is by Danehill's triple Group winning son Stormhill whose fertility issues saw him sire just 12 named foals, seven of whom are winners.

Dolce Boy is a full brother to two of those winners including the metropolitan winner Stormy Hill - and he is also a half-brother to the five times winner King Deano who was also a member of our stable.

Their dam is the multiple city winner Pattie Royale, half-sister to the stakes winners Garter King, Royal Sceptre and Orb who were all - like Dolce Boy - at their best over a bit of ground.