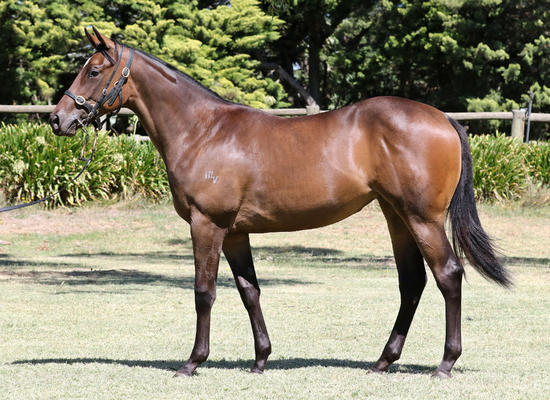 Little wonder that Du Well was sent out an odds-on favourite in the 1000m maiden at Mornington on Monday, the promising filly competing at that level for the first time having taken on black type performers at her first two starts last summer.

Not having a great deal of luck when seventh to Lady Horseowner in the Gr.3 Blue Diamond Preview in late January, then heading to Tasmania where she finished fifth behind Mystic Journey in the Listed Elwick Stakes, Du Well was given plenty of time before embarking on her three-year-old career.

And it was the perfect race for her, a small field of just five allowing her to dominate - her two length victory one that is bound to give her confidence.

"It was nice to see her win like that, to get a kill," Reid Balfour said, "and hopefully now she can take the next step and rise through the grades this preparation."

Riding Du Well for the first time, Andrew Mallyon was impressed, noting that the win was "pretty painless."

"She jumped quickly and always travelled well. I would've liked to have had her on the fence but a couple kicked up on the inside of me."

"So I just rode her where she was happy and she gave a good kick into the straight. I was able to ease her down late, it was easy. She didn't have to get into top gear today and she gives every impression that she can measure up in better class."

"She had a nice, cruisey day out today and she can go on to bigger and better things."

Spotted at the 2017 Inglis Melbourne Premier, Du Well is raced by a large and happy group of owners who have plenty to look forward to. A daughter of the BTC Cup winner Duporth, she is the fifth winner produced by the lightly raced Royal Academy mare Morwell who finished runner up at three of her four starts.

Also dam of the Hong Kong winner Sunny Win, Morwell - daughter of the stakes winning two-year-old Marwell Lady - recently produced a colt by Zoustar and has yet to be named youngsters by that stallion and Night Of Thunder.