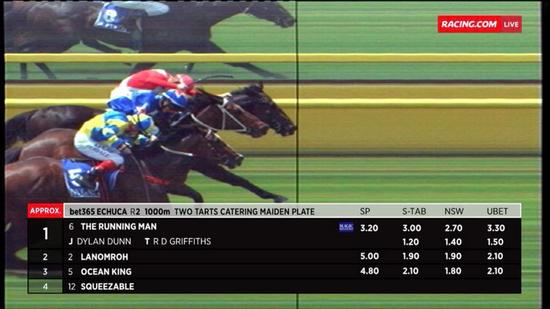 Having finished gallant seconds at two of his previous three starts it was a deserved break through for the promising The Running Man at Echuca on Wednesday.

Sent out favourite on the back of that consistent form, the son of Zoustar was always travelling well for Dylan Dunn, sitting outside the leader before taking over at the 200m - digging deep when two rivals charged at him over the final stages.

"They left it up to me as to where we landed," Dunn said. "He jumped well and was able to relax underneath me - I did think we were beaten but to the horse's credit he really stuck his neck out."

"Being outside the leader was perfect, he always had something to take him into the race."

"He has always shown talent, " Robbie Griffiths said, "but he has been a hard horse to manage."

"Hopefully the hard work is behind us and we can now see his real talent - I am sure the confidence of winning will help him along."

Purchased by Robbie and Peter Ford (both of whom remained in the ownership) at the 2017 Gold Coast Magic Millions, The Running Man was bred by Gerry Harvey out of the well related More Than Ready mare Please Leave.

Now in New Zealand having been served last spring by Tarzino, Please Leave is a daughter of the stakes winning juvenile Shovoff whose dam is the five times Group winning Golden Slipper placegetter Startling Lass, sister to the Blue Diamond winner Midnight Fever.