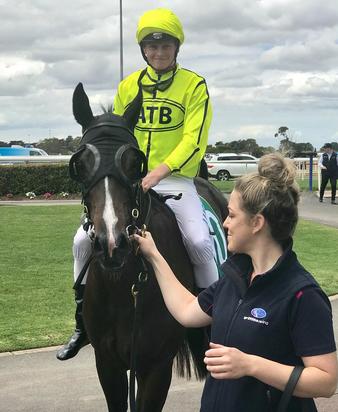 What a deserved break through it was for Dentara at Terang on Wednesday, the tough filly having been in the placings at her three previous starts - which is why she was sent out favourite in this 1200m contest.

And she never looked in any danger of defeat, jumping fast from an inside gate and controlling the race throughout - giving a kick straightening and holding off a challenge by French Fizz to in in convincing fashion.

"She had been meeting smart types and had been game in defeat," Australian Bloodstock's Peter Morganti said, "so it was a much deserved win."

"She jumped well and controlled the race, she relaxed beautifully throughout the run and it was just a matter of pushing the button."

Beth Schroen was confident throughout - "Jarrod rode her nicely, he left enough in the tank for her to be able to kick nicely in the run home."

A home-bred for Australian Thoroughbred Bloodstock (also breeders and owners of runner up French Fizz), Dentara is a daughter of Lonhro's Golden Rose winner Denman and the three times winning Exceed And Excel mare Keltara.

Sadly losing a Shalaa foal in September, Keltara is also dam of the winner Zoomesday and she has a yearling colt by the outstanding stallion Written Tycoon.

Dentara's success was the first for a good day for the stable with Du Well making it a double at Sandown later in the evening. We are hoping she can go right on when she steps up to city grade at Moonee Valley at the end of the month.