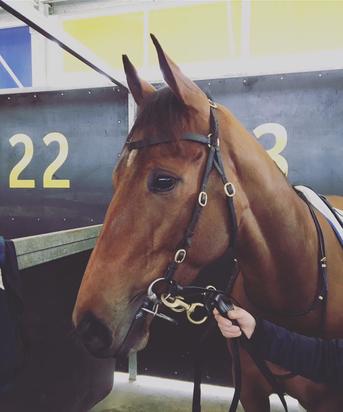 What a terrific day the stable enjoyed at Bairnsdale on Wednesday with each of our six runners acquitting themselves well - debutant Self Imposed a close and unlucky second, So Schmick also runner-up (flying home at big odds), Charlton a game third, Perfect Command a gutsy second whilst Cherief's Choice and Sagarra were both in the winner's circle.

It was a particularly well deserved win recorded by Cherief's Choice who had not enjoyed the best of luck since claiming her maiden at Pakenham in August last year. Since that time she had however been consistent, finishing runner up on five occasions!

Charging home over the final stages of the 1000m BM58 event, Cherief's Choice looked to the eye to have just missed out but the photo showed a clear margin, much to the relief of connections - and to the stable's Beth Schroen.

"She has always had talent but has often been unlucky; it was really good to see her first over the line today. I thought she had run second so it was a good surprise, it was fantastic to see her put her nose down."

Enjoying his first Australian double, Martin Seidl noted that whilst things did not go exactly to plan during the race, he was happy with the heart shown by his mount - "she was fighting at the finish," he said, "she did a good job."

Bred in Victoria by the Balmerino Racing Partnership Trust, Cherief's Choice is a daughter of champion stallion Redoute's Choice and the winning French Deputy mare Cherief who sadly died having produced just three foals with her last being the yet to race two-year-old Star Witness filly French Star.

Purchased with Peter Ford at the 2016 Gold Coast Magic Millions, Cherief's Choice hails from a strong black type family with her dam being a half-sister to the Group One mare Alverta and the Group Three gallopers Aerobatics and Revolte.

Her fourth dam It's In The Air was one of the best fillies of her generation in the United States, the member of the debut crop of the mighty Mr Prospector successful at the elite level on five occasions. Her other descendants include the Group One winners Storming Home, Glencadam Gold, Music Note and Musical Chimes.