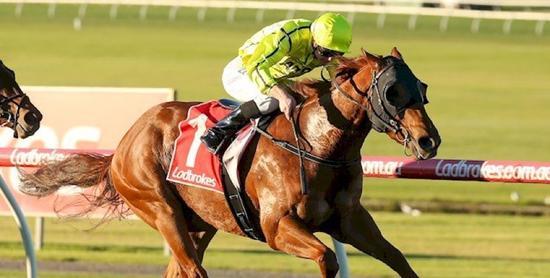 Robbie had expressed concern about Mr Money Bags' wide draw at Flemington even before the jump on Saturday - on paper the race looking a tough task with pace inside of him likely to keep him wide.

And that is just how it eventuated, Mr Money Bags unable to get cover as he did a bit of work but fortunately for connections he is a horse who just does not know how to run a bad race and his toughness shown through as he gathered in his rivals from the 200m - sprinting clear to win impressively by 1 3/4 lengths.

"Not a lot went his way," Robbie said - "he was three wide without cover, pushed four wide turning... but he is just a great horse who wants to win."

Watching with owners who were a bit worried about the wide run being endured by Mr Money Bags, Robbie was still upbeat - noting that the horse's regular jockey Jye McNeil had him into a nice rhythm.

"I was delighted with the way Jye was rating him," he said, adding that "we have seen him race without cover before and still be strong to the line. We know he always tries so hard but to go and win like that and break 1.23 seconds - it was a tremendous effort."

What is next for Mr Money Bags is still up in the air but with his love of Flemington (this win his third success from eight starts there) next month's Chester Manifold Stakes (a race won on two occasions by our warrior Danzylum) looks ideal for him.

"We have an open mind as he is a Magic Millions horse so that will be up for discussion - but the Gold Coast is a tricky track and he does race so well at Flemington so we will probably come back here."

The winner of five of his 17 starts and over $360,000 in stakes, Mr Money Bags has finished out of the first five on only two occasions. What a great return he has made on his purchase price as a $25,000 Adelaide Magic Millions yearling back in 2016; in retrospect an amazing bargain considering that he is a son of the wonderful stallion Written Tycoon.

Sadly Mr Money Bags' dam, the Warwick Farm winner Biggietupac, died young a couple of years ago with her final of just four foals being the yet to be named yearling colt by Love Conquers All.