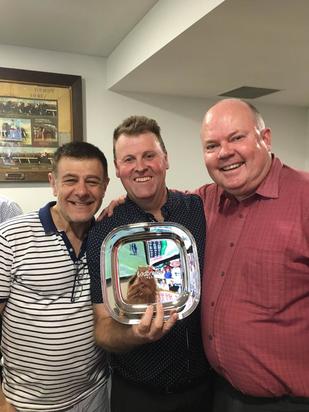 150m to go in the Ladbrokes Handicap at Sandown on Wednesday and there were four horses stretched across the track, an exciting finish ensuing. All the more thrilling as it was our girl Ambitious Gem who was able to finish the best of them - sticking her nose out right where it counts!

In doing so she had sustained a long run having hooked out widest at the top of the straight, really stretching out in the run home to record her third victory from 11 starts and her first at metropolitan level.

It was also a first for the Robbie Griffiths/Nathan Punch combination with both delighted by the breakthrough - "it is a big thrill to ride my first city winner for Robbie and a big thrill to win on this mare as I have done a lot of work on her," Punch said.

"Robbie has given me plenty of opportunities in town but things just haven't gone out way."

Fortunately this time they did!

"He followed instructions perfectly," Griffiths said, happy having watched previous races to have Ambitious Gem make her run down the outside.

"She was a bit unknown at the distance and that last 100m was a bit testing for her but she's got a really good turn of foot which got her there."

A graduate of the 2016 Inglis Melbourne Premier Yearling Sale, Ambitious Gem is raced by a big and happy group, many of whom made the trek out to Sandown to cheer her home.

A daughter of the reliable Bel Esprit bred by Northern Lodge Stud, she is out of the Gr.3 placed Moonee Valley winning Flying Spur mare Okaylah. Also dam of the five times Singapore winner Marine Treasure and the city placed Joadja, she was served last spring by Capitalist having produced a Written Tycoon filly in late September.