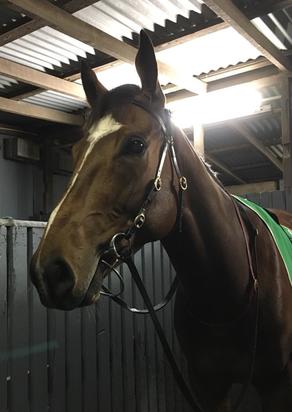 Improvement at each run in is what you love to see of a horse and that is just what Riverdance Lad's current campaign has been like - the honest five-year-old tenth when resuming at Bendigo in late November and closer up when fourth at Cranbourne in late December.

Pulling up so well from that run that he was able to back up a week later, Riverdance Lad returned to Cranbourne on Friday night where punters expected that he would be running for second - the lightly raced and promising Phaistos sent out an odds-on favourite on the back of a good run at a higher level at Flemington.

But, stripping fitter for his two runs back from a spell, Riverdance Lad chased home gamely; Phaistos showing good fight over the final stages but our fellow putting his nose out right where it counts.

It was win number three for Riverdance Lad whose prizemoney sits at just a few hundred dollars below $100,000. The son of T.J Smith Stakes winner Master Of Design has a good affinity with jockey Regan Bayliss - the pair combining on two occasions for two victories.

"He is a tough horse," Bayliss said.

"I won on him here on a heavy track last year and it was good to see him come back onn firmer ground and win again."

It was a well judged ride by Bayliss who, upon noting that the front runner was enjoying an easy time, did not leave his run until too late - "I thought the leader was getting away with cheap sectionals and I did not want him to get away so I crept closer."

Bred in Victoria by Monomeith Stud, Riverdance Lad is the first foal produced by Golden Snake mare Waltzing Lily, half-sister to the durable Diggersanddealers, a stakes placed multiple city winner who has saluted on 11 occasions.

Not served in recent years, Waltzling Lily is also dam of the yet to race three-year-old Floral Pegasus gelding Chancey Garderner and a yearling filly by the Melbourne Cup winner Americain.

Stakes winners from this family include the Gr.3 Carbine Club Stakes winner Inspire and the Maribyrnong Plate winner Our Joan Of Arc.