Break Through For Daisley 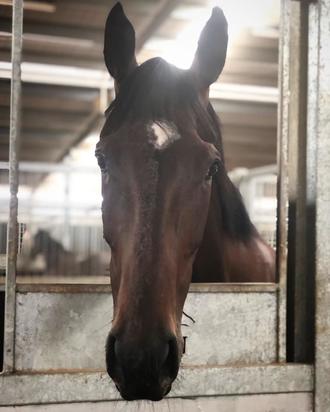 It was quite a sentimental win recorded by Daisley at Warrnambool on Sunday, the consistent mare being the first foal produced by a stable favourite - the Gr.3 placed multiple city winner Gail.

Bred by Robbie with Dean Lester (proud owners of Gail also) and raced with Shiranee and Sandra Borschmann, Daisley took a few runs to break through but it was worth the wait as she did so in dominant fashion.

Jumping straight to the lead from a middle gate, Daisley was at times taken on a little but she was always travelling well and, after making the turn with ease, she was able to skip clear - putting a couple of lengths on her rivals as she entered the straight.

And from there she was never going to be run down, her margin on the line a soft1 1/2 lengths.

"We had it quite comfortable out in front so I elected to go a bit earlier than I usually would," said jockey Jarrod Fry who was having his first ride on the four-year-old, "and she was able to steal the race."

A daughter of The Quarterback's sire Street Boss, Daisley hails from a reliable Victorian family whose members include the stakes winners Elite Elle and Rich Habit as well as this stable's Gr.1 placegetter Cancanelle.

Served last spring by Magnus, Gail has a yearling filly by that same stallion (another stable favourite!) and a yet to be named two-year-old colt by the W.S Cox Plate winner Adelaide.

"It is always nice to get any horse to win," Robbie said, "but it’s made more special when it’s one of your own home- breds… and it is great to share this win with my co-owner and breeder Deane Lester."