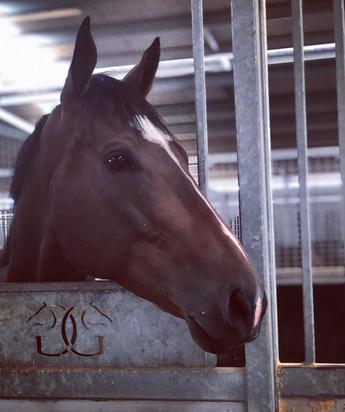 Whilst Robbie was kept busy inspecting yearlings - adding two lovely types (a Wandjina colt bred by The Quarterback's breeder Rick Jamieson and a Medaglia d'Oro filly) to the stable - at the Magic Millions, staff at home were working just as hard, rewarded by a victory with our only runner at the Friday night meeting at Cranbourne.

Part of a big night for local trainers who secured victory in all eight races, Riverdance Lad was sent out second favourite in the final event of the night and a patient ride by the newly returned, in-form Matthew Allen saw the tough five-year-old win his second race in a row.

It was win number three from just five rides back from a year long spell for Allen who has always done such a great job for the stable, during his time away from being a fulltime jockey still riding track work for us.

And he was happy to win at his very first race day ride on Riverdance Lad whose outside barrier draw looked to be a challenge.

"We drew a bit sticky so I thought we'd jump out and sit outside the favourite but another horse went around so I thought we might as well follow it."

Subsequently ending up with the run of the race, Riverdance Lad had to show heart to chase home the favourite as that horse got clear into the straight - and that is just what he did.

"Our horse toughed it out better," Allen said.

"He has come back in terrific form," said the stable's Reid Balfour, noting that Riverdance Lad was on a seven day back up having overcome a wide run from another outside barrier in a similar race at Cranbourne the previous Friday night.

"He backed up well and we are really happy with him," he said.