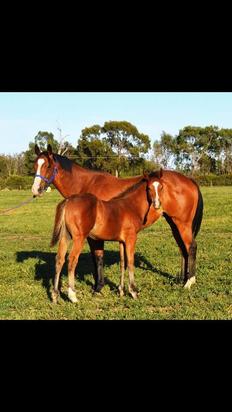 There were six horses stretched across the track as the final stages of the VOBIS Gold Carat unfolded. Each of them looked a chance. But we had eyes for only one - the widest of them, our very own Halvorsen.

"Halvorsen coming with a rattling run down the outside," declared caller Terry Bailey as the bay's happy owners began to cheer. 100m to go and he has joined the lead, 50m to go and he is off and away - recording his third victory from just eight starts at his first at metropolitan level.

Sent out at surprisingly good odds ($18) on the back of a dominant Bairnsdale victory and a game Sandown third off a wide run, Halvorsen impressed at his Moonee Valley assignment last Friday night - his winning margin a soft 1 1/2 lengths.

"He has got plenty of talent," enthused jockey Andrew Mallyon who has had two rides for two wins on the son of Magnus.

"He can be just a bit eager to get on with things but even from where I was tonight I could not have been any more confident... he just switched off so well and with that drag into the straight he was able to show that really good turn of foot he has."

"He still floats a bit when you let his head go, when he really learns what to do he will really see what he has got."

Happy part owner Don Healy was on course to cheer Halvorsen home, enjoying the connection with a family that the stable has had a lot to do with over the years.

"Many years ago Robbie and I bought this fellow's grandmother," he recalled. "Robbie had only just started training and we were looking for something we could syndicate."

And things were looking good when that Noalcoholic filly named Vaingt Trois bolted in with her Wangaratta debut - so impressive that she was sent out a short priced favourite at just her second start at Sandown.

But sadly that was to be the end of a promising career, Vaingt Trois fracturing a shoulder and never racing again. Fortunately Robbie had the good foresight to hold on to her and she rewarded him by producing nine winners including the tough stakes winning sprinter Beltrois and the city winners Trimensa, Vaingtlago, Ruby Trois and Flourishing.

It is the latter, who won four races including a 1000m contest at Flemington, who produced Halvorsen, her second foal and by one of our very favourite stallions too!

"She also has a two-year-old by Magnus who we have high hopes for," Healy said, enjoying the moment with his fellow owners who are all long time supportive members of the stable.

Congratulations to all of them!