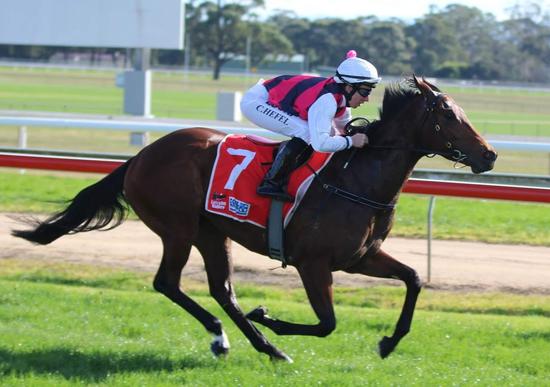 There were celebrations at Moe in late June when Influential Girl provided Carleen Hefel with her first winner and the up-and-coming apprentice was delighted to be back in the winners circle at the same track on Saturday.

"Moe is fast becoming a favourite track," she laughed.

Hefel was happy to have her first ride on the lightly raced filly - "I appreciate the opportunities and the support and am glad to get a winner for Robbie and his owners."

Despite not having the best of runs out wide off an awkward start, Miss Markle was in a good rhythm throughout and in the run home was quickly able to put ground on her rivals, racing clear to a soft 2 1/4 length victory.

"It was great to see her overcome a wide draw to win so well... Carleen rode her a treat," Robbie said.

"The owners have been very patient with this horse and we are glad to see them rewarded."

Robbie and Shiranee are in the ownership (along with a big group of other happy stable clients) of the daughter of Purrealist - and they also bred her, making that maiden win even more special than usual.

Miss Markle is the fourth foal and fourth winner for Prospect Royale, a lightly raced winner and city placegetters for the stable. Served last spring by Fiorente having produced a Stryker colt in September, she has done a good job for us - also producing the metropolitan placed winners Mr Tindall and Purely Royal as well as the two times winner Inferential.

Prospect Royale is a daughter of the stakes placed four times winner Regal Prospect, half-sister to the stakes winners Regency and Regal Strike.