Wycheproof breakthrough for Star Of Moshe 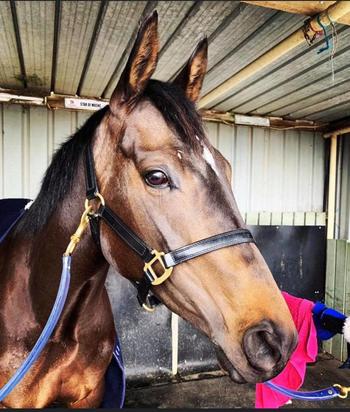 Whilst most racing eyes were at Flemington on Saturday, we were pretty happy to pick up a smaller prize at Wycheproof where Star Of Moshe proved a class above her rivals racing away to a three length victory in the 1400m maiden.

It was a deserved breakthrough for the mare who'd had little luck at her previous outing - and a reward for her patient connections on the back of her three placings from her first twelve starts.

Nicely ridden by Samuel Payne who had her in the box-seat, Star Of Moshe had to get going a bit early when the speed went on at the 500m but she was quick to respond - bursting clear from the top of the straight.

"It was a great run!" Robbie Griffiths enthused - "she was great and Samuel rode her a treat!"

Picked up at the 2017 Tasmanian Magic Millions, the daughter of Black Caviar's brother Moshe is the fifth foal and fourth winner for the unraced Cape Cross mare Celebrity Times.

Also dam of the three times Tasmanian winner Just Mouse and the Singapore winner Dragon Player, the now retired Celebrity Times is a half-sister to the NZ Gr.3 winner Superturf from the family of Gr.1 galloper King Phoenix and the Group winners Beaujolais, Eros, Steel Phoenix and Miss Steele.