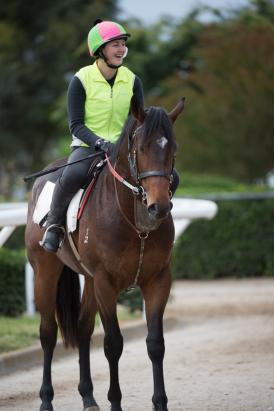 The stable's great success with the Bel Esprit breed continued at Kilmore on Tuesday, exciting three-year-old Asia Spirit breaking his maiden in easy fashion, recording the biggest winning margin of the day.

Sitting nicely in fourth position for Matthew Allen, the talented colt got into clear running early in the straight, hitting the lead at the 200m before racing away to salute by a soft 3 1/4 lengths.

Having just his third start and his first since late July, Asia Spirit was a hot odds-on favourite having caught the eye when third at his first two outings over the winter.

And the race made enjoyable viewing for connections, Asia Spirit having his rivals covered a long way from home.

"That was very easy to watch," said the stable's Reid Balfour, noting that "he landed in a beautiful spot."

"He has improved off his little two-year-old preparation and he is a nice, progressive colt who looks at least city class and hopefully even a bit better."

Allen was happy with the way in which Asia Spirit, who he says "does like the ladies" travelled.

"He behaved himself beautifully today, in fact he may have been a bit too relaxed and I wasn't sure coming to the turn how much he had to give. But he quickly let down when I asked for his effort and he had them covered a fair way out."